You are here: Home / Journal / Another typical day in Idyllwild and a couple self portraits

Today was just another typical day in Idyllwild. I woke up a bit early and took the opportunity to take a mountain bike ride with Tucker in the relatively cool morning. I was back by 7:45am for a quick shower then headed into town to my favorite of all breakfast hangouts Cafe Aroma . This place is magical and once again I met another interesting group of people. Today was a group of three women from San Diego and a guy visiting them from New York. Over the course of a couple hours we chatted between tables and I had a individual 15-20 minute conversations with each of them coming over to my table on subjects varying from immigration to art. All the while Ernie Ale playing is gentle guitar in the background. It doesn’t get better than this. This really is what I love about travel, it’s the carefree meeting of people, the exchanging of ideas with strangers. I love it.

After my long lingering breakfast I headed back to the cabin and spent a few hours on the computer continuing my Photoshop education. I spent the time mostly trying to find a good organizational tool for my photos, like the organizer included with Photoshop Elements, but properly linked up to Adobe Camera Raw and Photoshop… like Adobe Bridge is, but Adobe bridge is a quite poor in terms of tagging, organizing and importing so I want something better. The “answer” is Adobe Lightroom which isn’t yet available yet but promises to be “the” solution I’m looking for. My fingers are crossed the windows beta will be released soon. In the interim I’m checking out Iview, although I don’t find it very intuitive. Well that’s what I spent the day sorting out. As promised I thought I’d post a couple self-portraits of where I’m spending my time in front of my computer here. 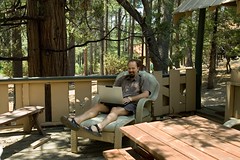 Here is me hanging out on the deck and to the below to the right is me literally hanging out in the “backyard”.  Usually Tucker will wander around a bit and then lie down under the chair hammock, very sweet. Of course with me running back and forth from the tripod he was curious to see what I was up to so you don’t get a photo of him napping. 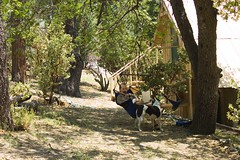 Now honestly I do spend a portion of the time indoors, after all my laptop battery only last a couple hours and the weather and sun don’t always cooperate with me being outside. Ironically it’s nicer being outside when it’s overcast since it’s cooler and there isn’t as much glare on my laptop screen. On days like today the weather is a big factor.  Just a few minutes after I took the shot in the chair hammock a little thunderstorm rolled in sprinkling down rain. This in my mind of course was the perfect opportunity to head up the hill behind the cabin with my camera in hopes of catching a photo of some lighting.  Unfortunately as was the case the other two times I saw a flash of lighting and went running outside in hopes of catching a photo, I had no luck with the camera.  The 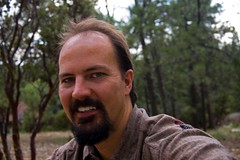 lighting seemed to be mostly striking on the other side of the peak. I did get a pretty good hand held self-portrait of myself though and found a new found respect for photographers with patience to sit and wait for their shot… I waited about a half hour on a rock watching the grey sky, which was a beautiful little meditation really, listening to the thunder’s echo swirl around me as it bounced off different mountain peaks and valleys, but didn’t see any real lighting. Then I waited about five minutes for a lizard to reappear from the hole I saw him duck into hoping it would make a good photo, but that didn’t happen either…  once again respectful of photographers with patience. Still another beautiful day.