You are here: Home / Journal / Power Tools and Computers 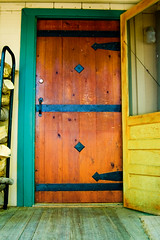 I’ve spent a lot of the last few days in front of my laptop reading up on Photoshop. It’s not so bad, I spend a good portion of the day sitting in a hammock chair or a chaise lounge outside on the deck at the cabin in Idyllwild. What did we do before WiFi? Perhaps a self portrait is in order, maybe tomorrow so that it can truly be appreciated. I think I’m starting to get a hang of some of the Photoshop basics. I’ve really struggle with tweaking color in photographs, but I think my skills are coming along. I’ve learned to make subtle adjustments. My latest effort can be seen on my flickr site including a before and after shot, and for bonus points I posted another shot where I edited out a couple distracting objects. I actually like the photo with the distracting objects left in the best, removing them was more to see if and how well I could do it. I’ll let you figure out what two objects I removed. Anyway, I think I’m starting to finally starting to get a hang of tweaking colors to achieve realistic albeit better than originally shot colors. 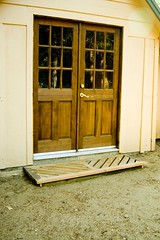 I did take a little break yesterday to break out the power tools and build a little step for the the garage. I should explain that it used to be the garage and was recently converted into more of a storage room, hence the french doors on the “garage”. I’m sure I could have built the step with a hammer and saw, but it was one of the last construction projects before I go so I needlessly broke out the sliding compound miter, table saw, pneumatic air gun and cordless circular saw. Fun! Anyway, the step should help dramatically reduce that amount of dirt, pine needles, etc. that have been getting tracked into the room. I just made it out of some extra 2×4’s that were just taking up space on the deck. I still need to rebuild the railing on the front stairs… maybe later today.